The Central Health Board of Managers has named new officers for the upcoming 2012 calendar year.

Beginning January 1, 2012, Rosie Mendoza will serve as Board Chairperson. Frank Rodriguez was named Vice-Chairperson. Brenda Coleman-Beattie was appointed Treasurer. Anthony Haley has been named Secretary. The full board voted to confirm all nominees on Wednesday, Dec. 14.

Each new officer will serve for one full year.

An ad hoc Nominations Committee, including Board Members Rosie Mendoza, Clarke Heidrick, Rebecca Lightsey and Lynne Hudson, convened on Dec. 8 and confirmed nominations, culminating in the recommendations that were approved by the full board today.

The Travis County Commissioners Court also reappointed Board Member Rebecca Lightsey to a new four-year term on Oct. 25. The new term will begin on Jan. 1, 2012. Lightsey began service on the board in March of 2011, fulfilling an unexpired term vacated by retiring Board Member Dr. Donald Patrick. 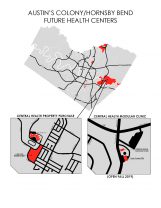