(Austin) – Following a special meeting Friday, the Central Health Board of Managers announced their finalist for president and CEO. 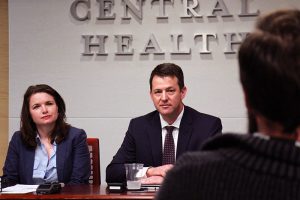 After conducting a national search, the board of managers selected Mike Geeslin of Austin to lead Central Health. Geeslin is the executive director of the Texas Dental Association and former Commissioner of Insurance for the Texas Department of Insurance.

“This is one of the most important decisions we’ll make as Central Health board members,” said Katrina Daniel, Central Health Board Chair. “We had many qualified candidates apply for this position, which shows how many people share our passion for making Travis County a model healthy community. In the end, we agreed Mike was the right choice at this time to lead Central Health into the future.”

About Mike Geeslin
Geeslin has more than 20 years of experience in legislative, executive, and association leadership roles. He has extensive experience in building collaborative stakeholder relationships and creating effective outreach campaigns to bring stakeholders together, build partnerships for the greater cause, and reach consensus among groups of diverse interests. Throughout his career, he has developed a deep understanding of fiscal management and budgeting, with the ability to control costs, manage resources, and invest in strategic initiatives for the long-term benefit of the organization and the people it serves.

As Executive Director for the Texas Dental Association, Geeslin serves members of the dental profession and provides administrative services for its affiliated for-profit and charity subsidiaries, with each entity governed by separate board of directors. Geeslin manages six direct executive reports and seven direct professional and administrative reports. During his tenure, he facilitated a high-level collaboration among deans of the Texas dental schools and the Association’s board of directors, and revised the financial reporting metrics and facilitated the strategic plan formation for the Texas Dental Association. 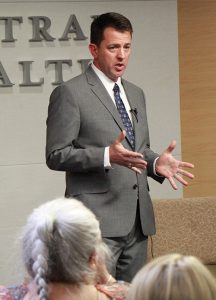 Geeslin served as the Commissioner of Insurance, Texas Department of Insurance for six years. He brings strong knowledge of compliance and regulatory requirements in publicly funded programs, having managed complex and large state budgets designed to ensure a strong regulatory structure. During his tenure, the Department implemented the early provisions of the Affordable Care Act, and created Healthy Texas, a small employer health program targeting the uninsured. Additionally, the Department recovered payments for consumers, facilitated complaint resolutions, and took major enforcement actions. To ensure stability in markets, the Department led interventions in operations of insurance carriers in financially hazardous conditions, with a focus on early detection and protection of consumers. Following Geeslin’s final term as Commissioner, he served on the board of Sendero Health Plans in partnership with Central Health. Geeslin helped guide Sendero’s launch in the Central Texas market, serving persons in the Medicaid, CHIP, and later Affordable Care Act programs.

Geeslin earned a Bachelor of Arts in Speech Communications from Texas A&M University in College Station, Texas; has been trained as a mediator; completed public policy dispute resolution programs; and is currently pursuing certification in association leadership

About the search
Last October the Board of Managers hired B.E. Smith, a health care leadership and executive recruitment firm to assist with the recruitment effort. B.E. Smith is a health care-only executive search firm that has placed 200 leaders in Texas in the past three years. B.E. Smith received applications from across the country. The Central Health Board of Managers narrowed the pool down to two finalists.

On Monday, April 3, and Thursday, April 6 Central Health hosted “Meet the Candidates” sessions, which were open to the public. Community members were invited to submit a question, which were asked by a moderator. The board offered Citizens’ Communications during Friday’s board meeting so the public could provide input.