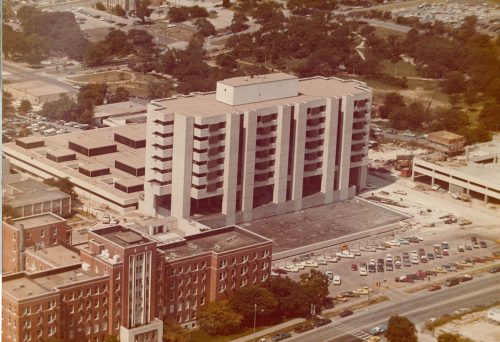 (Austin) – For half a century, the University Medical Center Brackenridge (UMCB) hospital towered above I-35 and 15th Street – a landmark for hospital care for Austin and Travis County.

“The former hospital tower holds so many special memories for this community,” said Dr. Guadalupe Zamora, Central Health Board of Managers chair and long-time Austin physician. “We honor people born here, who received life-saving care here, families who said goodbye to loved ones here, and of course the staff, nurses and doctors who worked here. As the tower comes down, it’s making way for a new chapter in health care delivery in our community.”

The Central Health downtown property, formerly known as the Brackenridge Campus, was home to the community’s public hospital for 133 years—from 1884 to 2017. The City of Austin transferred ownership of the hospital and property to Central Health in 2004, which included a lease with Ascension Seton to operate Travis County’s safety net hospital. In May 2017, Ascension Seton moved hospital operations across the street to the new Dell Seton Medical Center at The University of Texas (UT), making way for redevelopment of the property. The state-of-the-art Level 1 trauma center was constructed by Ascension Seton without local property tax dollars and serves as the primary teaching hospital for the Dell Medical School at UT, which is also directly across the street from Central Health’s property.

Four years ago, Central Health launched a comprehensive community engagement process to help plan for the future of its downtown property, which resulted in a Master Plan guided by three overarching principles: mission, stewardship, and partnership. While the community made it clear its first priority was generating revenue for health care, residents also envisioned a mixed-use development with a focus on medical and health innovation, jobs, retail, and more at the heart of what is now the Capital City Innovation District. Through public meetings, surveys, and facilitated conversations, the community created a vision of a development that would be walkable, sustainably built, and include access to nearby Waller Creek Park.

“While our execution strategy has shifted, the principles behind the community-developed Master Plan still guide our development,” said Mike Geeslin, Central Health president and CEO. “Most importantly, this redevelopment project will help pay for the growing health care needs of the people Central Health serves. We’re expanding access to care, and investing the proceeds from this redevelopment in people’s health.”

The Central Health property is divided into six blocks and is considered prime real estate for companies and organizations focused on health research, innovation, community, and education.

“This is the next milestone in our collaborative plans to transform health and promote new models of clinical care in Austin,” said UT Austin President Gregory L. Fenves. “The creation of UT’s Dell Medical School, the opening of the Dell Seton Medical Center at The University of Texas, and now, working with our partners, the redevelopment of Central Health’s’ property are part of UT’s commitment to serve our community.”

“It would have been at least 15 years until Central Health realized any net revenue if we’d stuck with a master developer strategy, and that just didn’t make sense in terms of funding our mission,” said Mike Geeslin.

Block-by-Block Lease Approach Paying Off
In June 2018, Central Health leased two of the six blocks to a local limited partnership (LP) called the 2033 Higher Education Development Foundation, formerly The 2033 Fund, a Texas-nonprofit corporation. The foundation was created by UT alumnus Sandy Gottesman to support future growth for Dell Med and UT Austin, and has already paid Central Health $2.75 million in base rent. Once construction begins on Block 164, targeted for June 2019, the foundation owes Central Health another $1.35 million, bringing the total to $4.1 million in Fiscal Year 2019. Over the term of the lease, the foundation will generate more than $460 million for Central Health.

Ascension Seton continues to lease the Ascension Clinic Education Center (the original Children’s Hospital of Austin) and the parking garage at 15th and Red River Streets, which serves the new hospital. The remaining buildings on the property are empty and awaiting demolition, including the Professional Office Building which once housed the Central Health-funded CommUnityCare Blackstock Health Center. Blackstock, home to Dell Med’s Family Residence Program, moved to Central Health’s Southeast Health & Wellness Center in March.

Key Issues Regarding the Central Health Downtown Property Demolition
Central Health is planning to demolish all unused buildings and structures, including the former hospital tower, providing future developers with a clean slate to build on. “Central Health researched multiple options to repurpose the former hospital tower including transforming it into a rehabilitation hospital, hotel, multi-family housing, student housing, creative office space, innovation labs and more,” said Steven Lamp, Vice President of Real Estate and Facilities. “However, the building is obsolete and would have a limited lifespan after it was renovated. By demolishing the out-dated building and fully redeveloping the property, Central Health substantially increases both the land value and the revenue potential.”